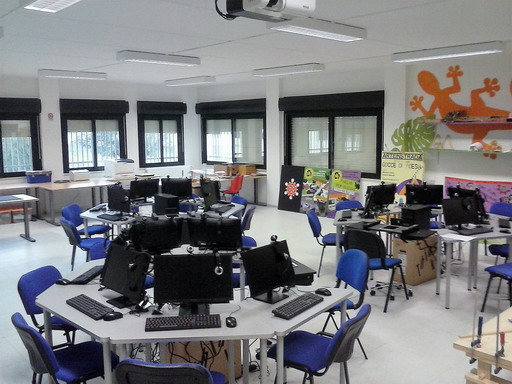 A laboratory for creative projects

Istituto di Istruzione Secondaria “G. Asproni” is an upper secondary school in Iglesias, a small town on the south-west coast of Sardinia (Italy). It was founded in 2009 when the Scientific Lyceum “G. Asproni”, which was established in 1924, merged with the Artistic Lyceum “Remo Branca”. There are around 600 pupils aged 14-18/19  and about 70 teachers  in both Lyceums.

IIS “G.Asproni” is an institution open to innovation and cooperation with other European institutions. Teachers and students are keen to carry out different and original projects  in the artistic, humanistic and  scientific domains. Its management believes that  IT is essential to cope with globalization. Foreign languages are considered key instruments to access  labour market. Also it is an institution open to intercultural  inclusion  and integration  of students with special needs.

The Scientific Lyceum “G. Asproni” has always been a centre of culture, science and art addressed not only to students who attend the school and want to get a diploma, but also to those who want to form their lives and to Iglesias’s territory as a whole. Its educational function has been strengthened by the fusion with the Artistic Lyceum “R. Branca” and its educational offer has been widened to meet cultural requests of the territory. This latter school has an important cultural role in preserving and protecting ancient monuments of the town.
In fact Iglesias has a large artistic heritage, its name means the “ Town of churches”, and the presence of ancient churches testifies this heritage. Besides, a Medieval castle and ancient palaces are notable landmarks of the town. From Roman times to the second half of the 20th century Iglesias’s economy chiefly depended on mine industry. In the late 1970s most mines were dismissed and its economy was converted to processing industry. Nowadays, the town and its territory are reconverting their economy into tourism and reappraising their cultural and environmental heritage.

A student of the Art course.